It's One of the Best New Burgers in Queens, and It's Halal 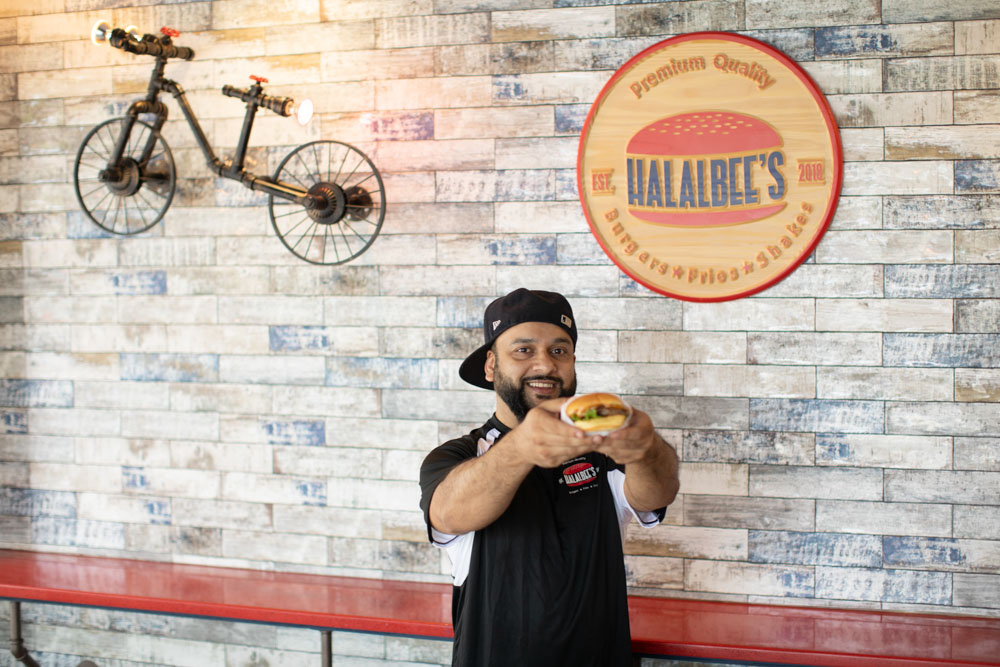 When Halalbee’s opened on Jamaica’s Hillside Avenue in December 2018, its premise was simple: four friends—one with a passion for burgers—had a dream of providing halal American fare to a wide Queens audience. Little did they know; their customers’ enthusiasm for burgers would rival their own.

Thouhid Khan was 17 when he tried his first burger. Actually, it wasn’t his first burger, but every burger he’d tried beforehand was a halal fast-food version, covered in curry and other sauces, thin-pattied, previously frozen and bacon-free.

It wasn’t until Khan emigrated to the United States from Bangladesh in 1996 and got his first job as a cook at a Sheraton near John F. Kennedy Airport that the hotel’s chef put in front of him what he considers his first true burger. It was love at first bite. 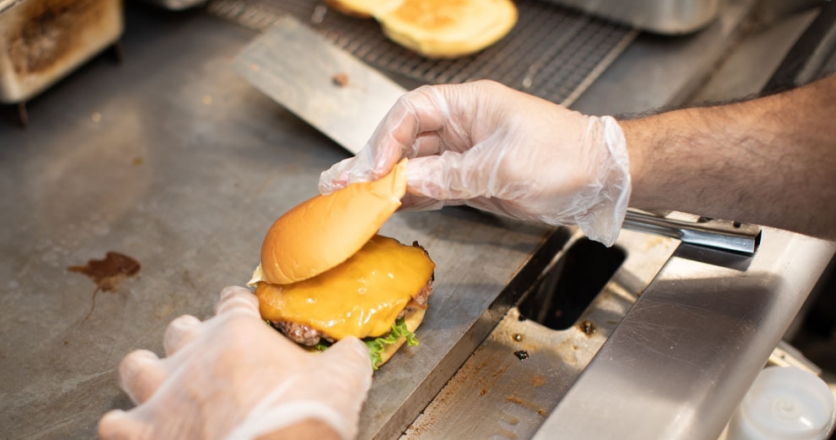 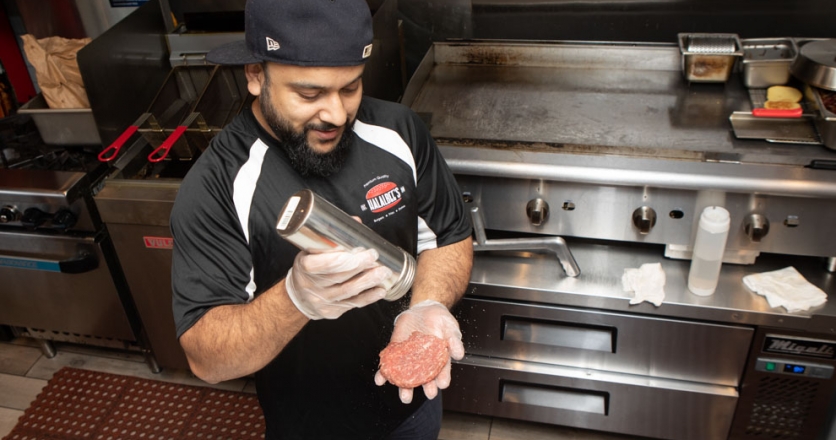 Upon arrival in the United States, Khan was experiencing foods, smells and cultural shifts anew. But burgers forged a special place in his heart. He jotted down notes about burgers on napkins and scraps of paper and started compiling them. He begged the Sheraton’s head chef to teach him how to cook. In response, he was abruptly put on onion-cutting duty for two months straight. The task was a test of patience: Khan succeeded.

For the next 10 years, Khan fastidiously kept up his burger notebook, often trying non-halal burgers in secret. Now he uses his phone’s notes app to keep track of burger details.

In Khan’s spare time, he began perfecting hamburgers in his home kitchen. At family get-togethers, he assumed his place at the grill. As word traveled that Khan was making burgers, tasters kept popping up, hoping to sample Khan’s creations.

“I got to the point where I was cooking for 120 people by myself,” Khan says. “It helped me to get ideas and feedback.”

It was at one of these backyard barbecues that he met George Chang, a good friend of Khan’s neighbor back in Bangladesh, Abdul Chowdhury.

“He makes the best food,” Chang says matter-of-factly of Khan. “We’d have parties for 45 people. I’d do Chinese food and Emon [Khan’s nickname] would do burgers. At the end of the day, we realized that this was bigger than just cooking for friends. We knew we had to do something.”

They partnered with Chowdhury and Khan’s cousin, Tarin Elahi. When a restaurant in Jamaica became available to rent in the fall of 2018, the group jumped on it. After just two and a half months of strategizing, they opened Halalbee’s in December 2018. 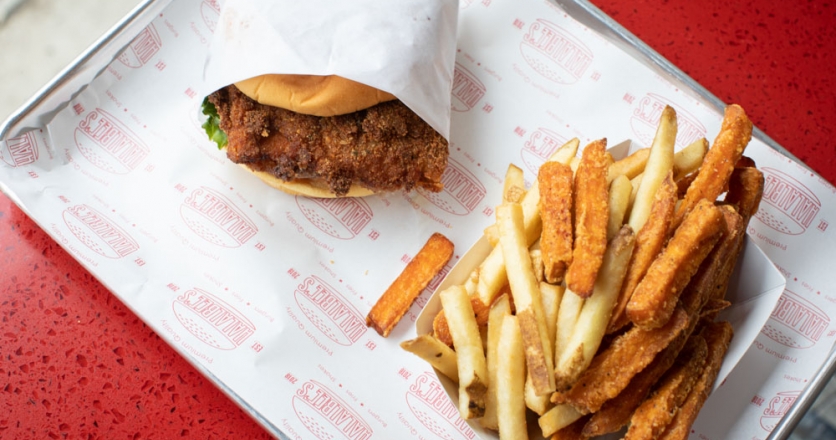 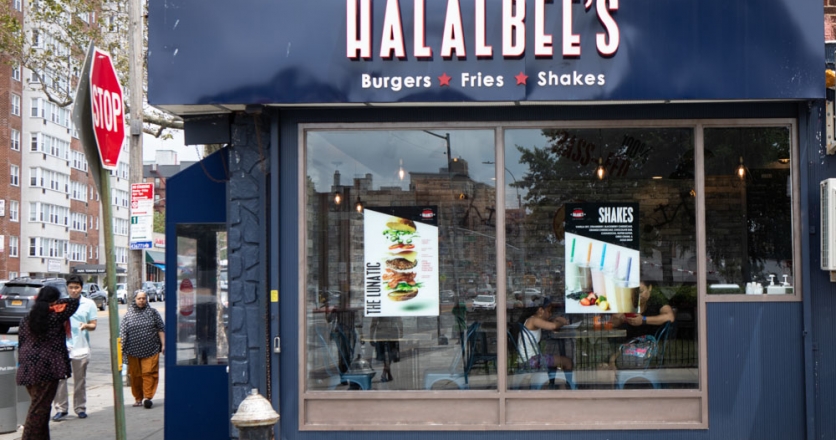 As the foursome sees it, Halalbee’s is catering to an untouched local market: people of all backgrounds who choose to eat halal. Their clientele is approximately 60% Muslim, and 40% non-Muslim eaters.

“When people hear of a halal place, they expect the typical meat-and-rice platter with white sauce,” Khan says. “We’re exceeding that and serving real American fare.”

While Chang, Chowdhury and Elahi largely work on strategy, Khan is the executive chef. He also designs the flavors and forms the menu. Khan’s position offers the creative license he longed for, but it’s also a chance for him to source quality ingredients for the eatery’s burgers, fries, onion rings, fried pickles and shakes.

Halalbee’s sources prime, hand-slaughtered, halal beef from Australia, which, according to Khan, regulates halal standards more carefully than other sources. The USDA-organic-certified meat is 100% grass-fed, sans antibiotics and arrives within two days without having ever been frozen. The potatoes come from an Ohio farm after being aged for 26 days.

Customers tasted the quality. Two hours into the grand opening, Halalbee’s sold out of the 600 burgers they’d allotted for the weekend. Now, they sell 350–400 burgers daily. Customers travel from Connecticut, Brooklyn and New Jersey, sometimes bringing their entire extended families along. Khan’s chef from the Sheraton even visits occasionally. 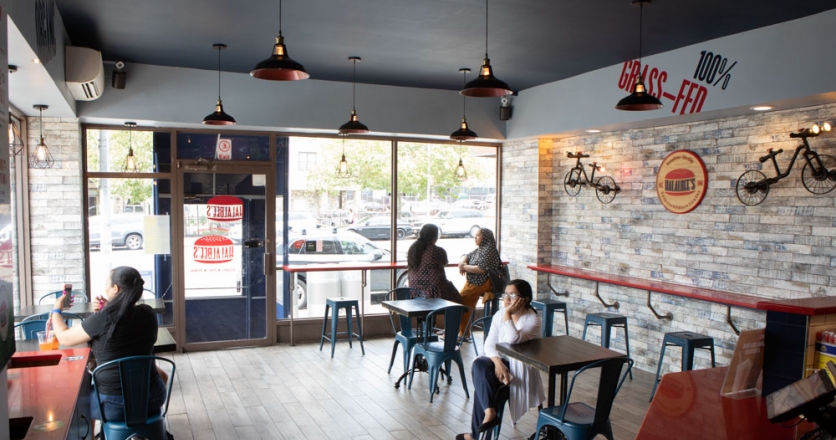 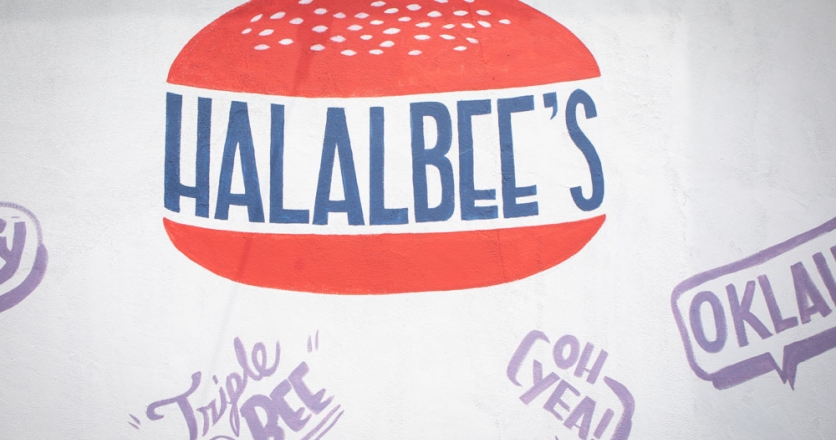 Behind the counter, Khan makes all of the ingredients and hot-pepper sauces. He has a long list of ideas for new menu items in the coming months, including a salsa burger with avocado and tomatillos, courtesy of his ad-hoc burger notes.

While Khan says his dream of opening a burger place has been achieved, he’s now looking to the future. In the next few months, Khan, Chang, Chowdhury and Elahi plan to open a second Halalbee’s in the Bronx. By next spring, they’re looking to open a third Halalbees, the location of which is still undecided. They hope to bring quality halal burgers and streamlined service to a new borough, as their customers have requested.

“Now, it’s about expansion,” Khan says. “This is do or die. This is my passion.”

READY FOR MORE?Sign up for our newsletters!

JOIN OUR NEWSLETTER! Stay up to date on the artisanal food and drink culture of the most diverse borough in New York.

Article from Edible Queens at https://ediblequeens.ediblecommunities.com/eat/its-one-best-new-burgers-queens-and-its-halal

Local, Fresh and In Your Inbox

Stay up to date on the artisanal food and drink culture of the most diverse borough in New York.

Your email address is invalid. Please enter a valid address.
We will never share your email with anyone else.
View our Privacy Policy.
Don’t ask again